Outlander Kitchen: To the New World and Back Again: The Second Official Outlander Companion Cookbook (Hardcover) 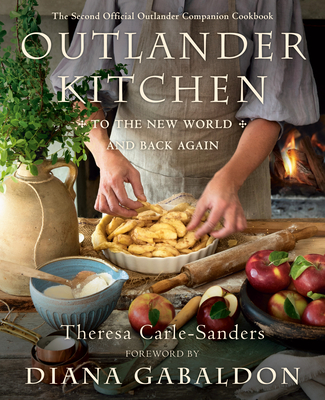 By Theresa Carle-Sanders, Diana Gabaldon (Foreword by)
$35.00
On Our Shelves Now

“If you thought Scottish cuisine was all porridge and haggis washed down with a good swally of whiskey, Outlander Kitchen’s here to prove you wrong.”—Entertainment Weekly

With the discovery of a New World comes an explosion of culinary possibilities. The later novels in Diana Gabaldon’s Outlander series and the Lord John Grey series have Jamie, Claire, Lord John, and friends embark on their revolutionary adventures across the Atlantic and back again—and with their voyages come hundreds of new mouthwatering flavors to entice the taste buds of even the most discerning palates.

Professional chef and founder of Outlander Kitchen, Theresa Carle-Sanders returns with another hallmark cookbook—one that dexterously adapts traditional recipes for hungry, modern appetites. Interpreted with a spirit of generous humor and joyous adventure, the recipes herein are a mixture of authentic old-worldreceipts from Scottish settlers, new-world adaptations inspired by the cuisine of indigenous peoples, and humorously delicious character-inspired dishes—all created to satisfy your hunger and insatiable craving for everything Outlander, and with the modern kitchen in mind:

With vivid, full-color photographs and a plethora of extras—including preserves, condiments, cocktails, and pantry basics—Outlander Kitchen: To the New World and Back Again is the highly anticipated follow-up to the immersive culinary experience that inspired thousands of Outlander fans to discover and embrace their inner chefs!

Theresa Carle-Sanders is a professional chef, food writer, and unabashed fan of Diana Gabaldon's Outlander series. The author of Outlander Kitchen, she lives on a small island in the Salish Sea between Vancouver and Victoria in Canada with her husband, Howard, and their dog, Koda.