The Sun Temple of Konark (Hardcover) 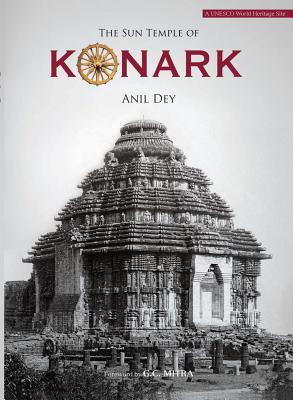 -Renowned architectural writer Anil Dey analyzes the myriad myths and mysteries surrounding the Konark Sun Temple, one of the Seven Wonders of India -Gorgeous pictures and accessible text on a complex and engaging subject -Will be of interest to those who want to learn more about India's religious and cultural heritage, as well as students of Architecture and South Asian history Empirical evidence is scant and scattered. Between these fragments, historians have filled the voids with legends. Though legends are not evidence per se, they do carry a seed of truth - and hopefully, their incorporation in this volume will inspire new interest in the mystery of the world's greatest temples. The engineering techniques that allowed ancient civilizations to construct such marvelous edifices have been lost to us for generations. Unfortunately, they have not received the attention they deserve, as relics of human culture and faith. This is especially true for Konark. In The Sun Temple of Konark, the author attempts to separate chaff from grain, utilizing scientific tools and methodologies. The Sun Temple has been recognized as a UNESCO World Heritage Site, and is considered one of the seven wonders of India. This seminal volume is the result of extensive research by the author into not only the history and legends related to the temple, but also the temple structure itself. An engineer and architect by profession, the author examines the temple in great detail. He questions several of the established theories regarding construction in its various stages and forwards his own theories with reasonable conviction. He takes great pains to go into as much detail as possible with regard to each and every portion, monument, and sculpture of the temple. With 415 images and 21 detailed architectural drawings, the book is a treasure trove for any admirer or student of Konark, or a researcher of its art, history, and architecture.

An engineer by profession, Anil Dey undertakes studies on temples in Odisha. His work is his passion, and he has spent over 60 years thusly engaged. This book is the culmination of his long and arduous research. An avid traveler through the Himalayas, he has to his credit five travelogues, and a number of short stories and articles. He has also authored a book on Konark in the Odia language. Of late, Mr Dey has been involved in promoting the Kalinga Heritage Preservation Trust (KHPT), with the aim of constructing a Global Sun Temple in Konark. G.C. Mitra is a Memeber of the Institute of Structural Engineering (UK) and holds a doctorate from IIT, the Indian Institute of Technology. His previous position was as Engineer-in-Chief, with the government of Odisha. He has also worked as Professor-in-Charge at IIT Kharagpur, Bhubaneswar Campus, and as Vice President of the Indian Road Congress. He has been awarded the Padmashree by His Excellency the President of India.