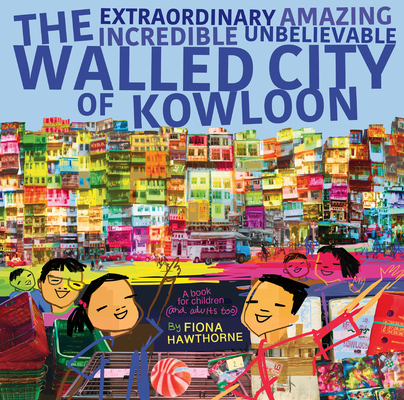 Imagine living in a high-rise mini-city that people built with their own hands. This city took up only the size of a sports stadium, but it was home to sixty thousand people What would it be like to live in the most tightly packed place on Earth? Fiona wanted to find out, so she went there to paint, draw and meet the people of the amazing Kowloon Walled City. There was nowhere else in the world like it. The extraordinary things she discovered are inside this book...

Fiona Hawthorne was six when her family moved to Hong Kong, where she was immediately inspired by the irresistible energy and bustle of the vibrant cityscape around her. Hawthorne's ability to paint and sketch in any location later led to work capturing London's emerging jazz scene, action on film sets, then to a series of celebrated public art commissions. She was the first artist in residence to the Royal Philharmonic Orchestra and her portrait of Barack Obama hangs in the Library of Congress. In 2016 Hawthorne was awarded the prestigious International Arts Advocacy Award by WIFTS (Women in Film and Television). Raising four children, Hawthorne has always engaged as an artist with schools and with her community, and she has created 20 years of art projects for young people. Often focused on Carnival, she has given hundreds of children an opportunity to take their artworks out of the classroom and on to the streets for public parade, with some of their work being displayed in the V&A Museum and Tate Modern Gallery. She believes that working with children's art, and seeing children's courage and freedom, is a privilege and helps keep her own drawings fresh, colorful and current. She lives in London with her husband and four children, and is still energized by Hong Kong.